skip to main | skip to sidebar

Over at Alas, A Blog, Ampersand has a strange accident of a post called an open thread where comments are closed. One of the items, a link to Muzzlewatch [and the real point of this post], which I normally will not read, is on the San Francisco Jewish Film Festival, which showed a film on Rachel Corrie. Upfront: every time I've come across the name Rachel Corrie, it's been about how evil I, personally, am. It's never been part of a real discussion of Israeli policy. Instead, I've been called to denounce Jews who support Israel's existence (for very good and real reasons I share) as evil and racist. Often enough, with the suggestion that I'm to blame for antisemitism because I won't. (And there's something, frankly, creepy about the way in which Palestinian supporters use Corrie's whiteness.) So, every time her name comes up, I have a Pavlovian reaction of ducking my head as if I were about to be hit. I find it threatening. And silencing, as well as simply not productive. I don't know specifically about the people who have called for the film to be removed from the film festival, but I have quite a bit of sympathy for the position.

Jews censoring Jews department: The controversy over a documentary about Rachel Corrie being shown at a Jewish film festival, as well as over whether or not Cindy Corrie (Rachel’s mother) should be allowed to speak: “this woman has no business attending and speaking at a Jewish event like the film festival.” Disgusting.

From that, one might expect that the film wasn't allowed to be shown. Or, perhaps that Cindy Corrie is Jewish. She's not, and that's also not what happened. From the JTA (and Jewlicious):

Despite festival director Peter Stein’s plea not to interrupt or disrespect any element of the screening, including speakers before or after, many audience members hissed, booed and shouted at those whose opinions clashed with their own.

The booed opinions nearly always were supportive of Israel.

Although Jewish Voice for Peace, which runs Muzzlewatch, claims to take antisemitism seriously, the truth is, they only sometimes do. (They did, however, stop allowing comments when they were attracting a great deal of antisemitism they couldn't ignore. They do not seem to have considered how they contributed to that.) They don't consider, for instance, that concerns about antisemitism genuinely ought to limit the scope of debate in a great many ways in order to ensure that discussion is less hurtful and more productive. Or, rather, they claim the sole right to determine when the discussion is hurtful or productive. For them, other Jews do not have a right to say "I find that antisemitic." To do so would be "muzzling." Let me use an image (source) to point out that Jews muzzling debate is not a new idea. Notice "The meeting the Jews want banned." And "Come and hear what the Jews fear." Also note it's sponsored by the National Socialist Movement -- in fact, 1960s, British neo-Nazis. 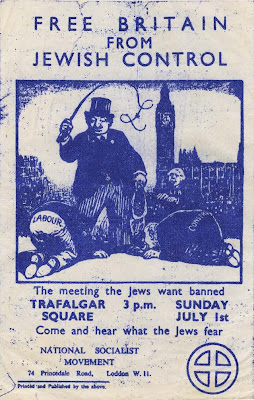 If you look under the label anti-semitism at Muzzlewatch, it is the rare piece that is actually about fighting antisemitism. It is instead, "like a powerless female character in a film who threatens to yell ‘rape’ if someone gets too close, some Jewish groups are only too happy to cry ‘anti-Semite’ if you get too close." Although they describe this as "the nuclear option for powerless people," at least acknowledging Jewish oppression, even if it has no role in their analysis, I find that an obnoxious and stereotypical depiction of Jews. Their view is routinely so one-sided that they can get the facts of the SFJFF completely backwards. In short, I don't think they're a very good source of information.
Posted by Matt at 11:09 AM

1) The comments were accidentally off; that's been fixed now.

I'm confident that you could look at every example of my mentioning Rachel Corrie on "Alas" without once finding me calling "to denounce Jews who support Israel's existence," incidentally. Let alone saying how evil, personally, you are.

3) I select links for the "link farm" posts gradually over the course of a week, and I don't think the screening had yet taken place at the time I put in that link (or if it had, I definitely didn't know about it -- actually, I only read about that a few minutes ago). Hence my not including that info.

I do think it's horrible that pro-Israel speakers were booed at the event. Not because it appears they were censored, but because it's bad for discourse.

(BTW, I have to admit my use of the word "censoring" was over-the-top and exaggerated).

4) Your attack on muzzlewatch and Jewish Voice for Peace is even less conductive to dialog than booing a speaker you disagree with.

As usual, people accuse Jews who defend Palestinian rights of supporting anti-Semitism, and in your case you compare them to Nazis.

The blog is specifically about the issue of criticism of Israel being either censored or subject to silencing pressure. Given the blog's mandate, it's unfair to complain that it doesn't talk about genuine instances of antisemitism.

I must be missing the point completely. I'm not Jewish, and not particularly moved by the navel-gazing of those pointing fingers at each other. I am however moved by the atrocities that occur in real-life, at the hands of Israel and it's supporters. Rachel Corrie is merely the white tip of a darker iceberg. For every such case, how many Palestinian deaths or privations at the hands of Israel go unremarked. Naturally, none of this is mentioned by the self-absorbed. There is a groundswell against the muzzling of those who oppose the lack of morality or humanity which seems integral to Israel in its current form. Mondoweiss, Muzzlewatch, and even Obama, are moving with this tide. I hope to see that change in my lifetime,as happened with South Africa. Unfortunately, there will be no Nuremberg, but such is life.

Barry, you're right that I didn't check to see how you personally stand on Rachel Corrie. I included you in the post, mainly because that's where I came across the Corrie post at Muzzlewatch. As for my view of you, I disagree with you often and think you need better sources. I apologize, however, for suggesting that you would use Corrie in such a way. The title of my post, btw, should probably be attributed to me being a bad writer -- I assumed it was an accident on your end. (Not so for MW.) My experience, however, is exactly as I described it. You'll notice how Keith writes, "I am however moved by the atrocities that occur in real-life, at the hands of Israel and it's supporters." There's no regard for why I might support Israel's existence. And somehow it becomes "at the hands" of people like me. As for whether my approach is less conducive to dialogue, I disagree. You write, "As usual, people accuse Jews who defend Palestinian rights of supporting anti-Semitism, and in your case you compare them to Nazis." I do not accuse them of anything because they defend Palestinian rights. I accuse them of saying exactly what they say. I understand the claim that Jews stifle debate as a typical example of conspiratorial antisemitism, and I have every right to say so.

Thanks for the apology, I appreciate that.

"I understand the claim that Jews stifle debate as a typical example of conspiratorial antisemitism, and I have every right to say so."

No one denies your "right" to say so. You can say whatever fool thing you want.

I do, however, deny that comparing the Jews on one side of a debate in the Jewish community to Nazis, as you did, is conducive to respectful dialog.

Nor do I respect trivializing Nazism to score a cheap argumentative point, whether it's done by folks on my side (as happens too often), or in your post.

Finally, it should be needless to say, your argument is illogical. It is true that Nazis criticize Jews for controlling the media. It is also true that Muzzlewatch has criticized both specific individual Jews and specific Jewish organizations for chilling debate about Israal. This doesn't make the comparison of Muzzlewatch to Nazis fair.

For one thing, there's a huge difference between criticizing specific Jews for their political views, as Muzzlewatch does, and criticizing the Jews as a race, as the Nazis do.

For another, it is at least in the realm of possibility that unfair accusations of anti-semitism are sometimes used in a way that chills speech. I don't accept that it's impossible to discuss that without being comparable to a Nazi.

Please get the hell off my side. Please.

I do agree that there's a rising swell of opposition to the sort of extreme rhetoric represented by Matt's comparison to Nazism. However, a rising tide brings in not only cleansing water, but also flotsam and garbage.

Finally, your comparison to Nuremberg is disgusting. I do agree that the Israeli government has committed some outrageously immoral acts (as have terrorists), but as disgusting as the occupation is, it's not even in the same league as the Holocaust.

I frankly think comparisons to Nazis -- both yours and Matt's -- are mainly about being as hurtful as possible. They certainly don't further dialog or make an intelligent point.

No one denies your "right" to say so. You can say whatever fool thing you want.

That's a kind of cheap concession.

As for comparing MW to Nazis (in this case, 1960s neo-Nazis), well, I'm afraid to talk about antisemitism sometimes requires the use of historical examples. I don't think that's trivializing, certainly not when the analogy is precise and limited, as it is here. Is this worse than making a connection between Bill O'Reilly and Dr. Tiller's murderer? Or between Pat Buchanan and the USHMM shooter? (Although I may think this through a little more, it is very unlike comparisons between Israel and Nazis, where the comparison isn't specifically targeted at Jewish trauma.)

For one thing, there's a huge difference between criticizing specific Jews for their political views, as Muzzlewatch does, and criticizing the Jews as a race, as the Nazis do.

That strikes me as a very superficial analysis. For starters, the Nazis often criticized Jewish Bolshevism and Jewish Capitalism -- in political rather than racial terms. Consider also, Stalinist anti-Zionism, which also used political language. Moreover, some of the pre-Nazi antisemites, like Paul De Lagarde in Germany or several British antisemites, were anti-racists. Not to mention that Jew-hatred pre-dates racism as an ideology. And moreover still, wouldn't you accept that people, even Jews, may use antisemitic tropes at times without subscribing to Nazi views on race -- that this is antisemitism worth criticizing?

For another, it is at least in the realm of possibility that unfair accusations of anti-semitism are sometimes used in a way that chills speech.

Isn't it possible that accusations of racism stifle debate on affirmative action? Sure. But the answer to that isn't to stifle sincere charges of racism or antisemitism. For starters, treating these things as equals denies the powerful history of these ideas. And ignores the ways in which Jews are still subordinate and without voice. For some reason (well, I can guess), what would be a reasonable campaign to empower Palestinians has been entirely replaced by a campaign to disempower Jews.

"it is very unlike comparisons between Israel and Nazis, where the comparison isn't specifically targeted at Jewish trauma"

Err.. I mistyped. Many people have said they compare Israel to Nazi Germany specifically because it is hurtful for Jews. My point was simply to use a historical example that we can agree is antisemitic.

There is no past, huh?

A few books I recommend