skip to main | skip to sidebar

Gentile privilege in a global world

Sometime ago, Julie tried to create a gentile privilege checklist. Good stuff, and a good idea. As she said,

As she also said, there are still questions about what constitutes gentile privilege. Strange as it may be, antisemitism is still undertheorized. And one of the most ignored aspects is its global nature. Going back to this picture, an important example of Nazi propaganda: 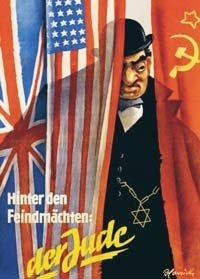 It was a German propaganda poster, but note how it depicts a Jew as controlling the UK, Soviet Union and US. With the bowler hat, it's a particularly English Jew, associated with "Manchester" (or "free market") Capitalism, even though the physical depiction is stereotypically Jewish. Why were the Germans so concerned with the power of Jews outside their own country? Because they saw Jews as part of "international Jewry." The perception of Jews was as a global force, associated with capitalism and communism and the big isms of the day that determined world events. If the Germans had been more strictly concerned with German Jews, they would have found they could effectively oppress Jews locally and they wouldn't have needed a world war to eradicate Jewishness from the world. But, of course, that's not what happeneed, because that's not how antisemitism works.

Today, half of Venezuela's Jews have fled to escape state-sponsored antisemitism, including two police raids on the largest synagogue in Caracas. But, of course, what scares Venezuela's antisemites isn't the power of Jews in Venezuela as much as it's the power of Jews in the US. Also, many Jews have fled Sweden, antisemitism there taking the superficial disguise of criticism of Israel. In many places, like Malaysia, antisemitism is a significant force even though there are few (if any) Jews. Throughout the world, there is a pressing need for a new way to talk about the oppression of local Jews in a global world as well as the privileges located inside the local community.

So we need to understand gentile privilege in a global perspective. I offer this addition:

Jews are widely dismissed as a national group. Often, we are told we are just a religion, and not entitled to the political powers that come with nationhood. We are the dominant group in Israel, which, of course, is the idea. At the same time, Israel is discriminated against within the UN. Since many members of what would be Israel's regional group do not recognize it, Israel is not permitted to participate in much of the work of the UN, which is organized by region. So, for example, Israel was not involved in any of the planning meetings for either the Durban conference or its follow up.

I think that's particularly relevant for those discussions which blamed Jews for sabotaging the discussion of reparations that was supposed to go on at those conferences. For instance, in discussing Mahmoud Amadinejad's speech at the Durban Review conference, which was toned down but still incredibly antisemitic, Naomi Klein presented it as a matter of protocol that he was allowed to speak. All heads of state would be allowed to speak (it's not clear if an Israeli head of state would actually have been allowed to speak), so it shouldn't be seen as a big deal. And Klein used this to shift blame for the conference's failures from Ahmadinejad to those who protested his speech. Not only was Klein wrong, I think she was grotesque in that article. I think this offers a better language for discussing why.
Posted by Matt at 3:53 PM

There is no past, huh?

A few books I recommend